The Flash Train functionality is only available in Steady State.

The Flash Train is not a unit as such, but rather it consists of a number of units, which together comprise a 'Flash Train'. A Flash Train typically comprises of one or more steam 'sources' connected to a steam 'sink' (normally a condenser). Once a flash train is recognised, SysCAD solves a number of conditions for that flash train and this forms part of the project convergence criteria. Conceptually, this can be viewed as a type of "automatic controller". The operating pressure of the flash train and a required steam flowrate typically need to be calculated and met. The operating pressure at the flashing steam source is adjusted to meet the steam demand required at the condensers, where that demand is typically based on the duty of the equipment (eg based on heat exchanger settings - Area, etc). The flash train is considered converged when the condensing duty is met (and hence the steam flow requirement is met).

For most unit models, the user can specify that they should operate in a 'flash train', as opposed to 'stand alone' mode. Some unit models can automatically detect that they are part of a flash train. Error messages are given for unexpected or mismatched arrangements. The manner in which units are joined together can effect whether a flash train exists.

There are a number of units that can comprise a Flash Train.

For example, if a Flash Tank is connected to other Flash Tanks, Barometric Condensers and/or either Shell and Tube or Direct Contact Heat exchangers, the model will become part of the entire Flash Train.

The Flash Train uses the Demand functionality to transfer the steam demand (calculated by the steam sink - for example condensing heater) to the steam source (for example a flash tank).

The diagram below shows an example of process units connected in such a way as to form four individual Flash Trains. These are NOT the only configurations for a Flash Train. 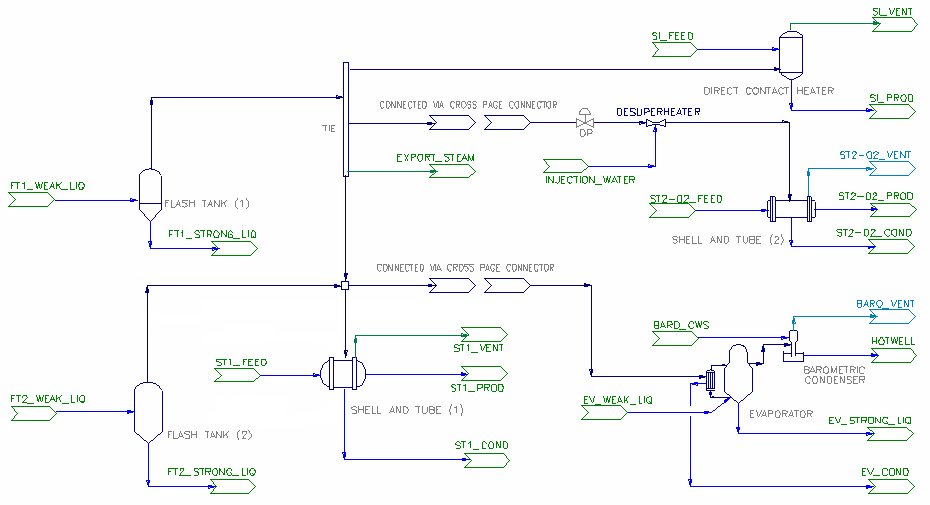 The Flash Train does not have configurable Inputs or Outputs. The user must connect the required Inputs and Outputs on each individual unit.

The theory for each individual unit is described in the documentation (see the relevant sections for the units that can comprise a Flash Train).

The object of the Flash Train is to emulate a plant system without having to hard-wire the temperatures and pressures of each individual unit. The Flash Tanks within the Flash Train will attempt to produce sufficient steam to satisfy the demands of the connected units. For example, if the vapour line from the Flash Tank is connected to a Shell and Tube Heat Exchanger, then the heat exchanger will 'demand' a certain amount of steam to meet it's duty for the given heat exchanger area. SysCAD will adjust the pressure in the flash tank in an attempt to produce sufficient steam to exactly satisfy the Heat Exchanger.

Units that can comprise a Flash Train

Note: If a Tie is inserted between two Flash Train units, the Flash train will be broken. To reform the flash train, do the following: 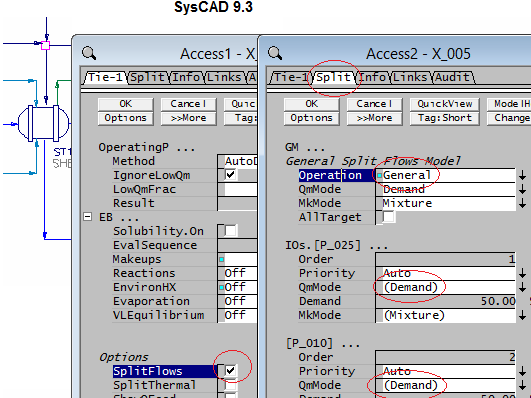 By default, SysCAD flows assume no pressure drop in vapour line and no heat loss from equipment, this may cause values from the model to differ to those from the actual plant data.

NOTE: When tuning the SysCAD model to test/plant data, it maybe necessary to include pressure drops and heat losses as it will affect the performance of the circuit.