This is a direct contact cooler. The unit has separate water and steam inlets; and mixture and vapour outlets.

There are two operational modes:

The operational mode is decided by the overall configuration of the flowsheet in which the unit is located. If the Barometric Condenser is correctly connected to other units such as a Heat Exchanger or Flash Tank 2, the model may become part of the entire Flash Train. The user does not have to specify whether the unit is part of a Flash Train, SysCAD will do this automatically. Refer to Flash Train for the rules governing this behaviour.

The Barometric Condenser will combine all of the incoming streams to form a homogeneous mixture, rejects heat lost to atmosphere (EHX) and performs any reactions (RB), before flashing the incoming streams. If a vapour vent is connected any non-condensable vapours and excess steam exit via the vapour outlet at flash pressure. The remaining mixture reports to the hotwell and the pressure is changed to the required hotwell pressure before exiting. The unit calculates the temperature, composition and flow rate of the exit streams. All of the liquid is pumped from the mixture outlet at the hotwell pressure.

The optional Environmental Heat Loss (EHX) may be included in the unit to allow the user to specify a heat loss, or gain, between the unit and the environment.

The diagram shows the default drawing of the Barometric Condenser, with the required connecting streams. The vapour connection allows for the removal of non-condensable as well as any excess steam. The user does not have to connect a stream to the vapour outlet.

The physical location of the connections is not important; the user may connect the streams to any position on the drawing. When the user inserts a Barometric Condenser into a flowsheet, they may choose a different drawing from a pull down menu.

The unit is configured to achieve Vapour:Liquid equilibrium (VLE) at a required pressure using VLE calculations for the user defined species (normally H2O). If non-condensable gases are present these are taken into account through the use of partial pressures. The temperature and amount of material which changes phase is calculated using an adiabatic flash routine1.

The unit will attempt to condense the steam at the user defined flash pressure or at the steam inlet pressure when used in a flash train. The equilibrium point of the unit will be that of saturated steam plus any Boiling Point Elevation equations that may be associated with the liquor.

Note: In this document when we use the word Steam this refers to the Flash Component vapour, which is normally H2O, but the user may define other flash species.

The user may select either the Approach Temperature or the Delta Temperature to determine the Steam requirement, either if the unit is part of a Flash Train, or in Stand-alone mode:

Under perfect conditions the unit would be at equilibrium and the heater liquor temperature would be at the saturation pressure of the liquor. This is not normally possible on an operating plant and hence we have an Approach Temperature, which is a measure of the efficiency of the Barometric Condenser. This is also referred to as the Terminal Temperature Difference.

The following shows the sequence of events if sub model options are switched on. See next heading for more information. 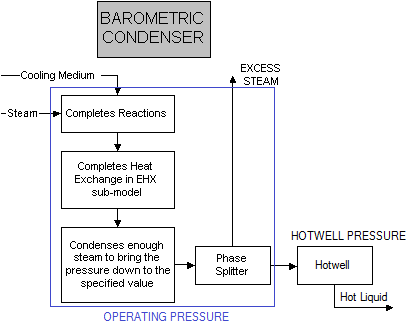 The default sections and variable names are described in detail in the following tables. The default Barometric Condenser access window may consist of a number of sections, which may change, based on user configuration.

Unit Type: BaroCond - The first tab page in the access window will have this name.