The falling film evaporator is used for liquor concentration. A schematic of the unit operation and its inlets and outlet are found in the next heading, under Diagram.

In a falling film evaporator, weak liquor is pumped to the top of the unit and distributed to the tubes where it runs down as a film. Steam is entered on the shell side, the condensation of the steam provides energy to heat and if hot enough, evaporate water from the weak liquor, thus concentrating the liquor stream.

The concentrated liquor and Liquor Evap streams will leave the system at Saturated Pressure based on the Final liquor temperature.

On the shell side, a heat loss term can be specified. This accounts for any inefficiency of the unit. If this heat loss term is zero, then all the energy from steam condensation will be used to heat and evaporate the weak liquor. The condensate will leave the system at saturated temperature based on the steam pressure.

So basically, the unit will be 'bypassed' without the user having to change any connections.

NOTE: If the FFE4 unit being switched off is part of an flash train, then the flash train may break as there will be NO flash vapour to supply the down stream unit. Please see Hints and Comments for more information.

1) Energy from fully condensing of steam.

The operating modes are similar to those in the existing Evaporator models.

The first two of these operate with determined feed flows, the latter two control their feed flow through connection to a flash train or a feeder with Demand enabled.

In the All mode, all the condensable feed is actually condensed, for a given feed flow, this determines the heat to be transferred to the evaporator. The surface area required to transfer the heat load is displayed as a result.

For All (Calc Demand) the user is responsible for adjusting the feed flow to meet the required demand which is calculated and displayed. (This can be done using a SetTag controller or other logic)

If the supplied flow doesn't match the demand, then a warning is displayed.

For the other two options the feed should be connected to a source with demand enabled, or to a Flashtrain source such as a flash tank or the evaporator section of another FFE.

Falling film evaporators are a combination of flash tanks and heat exchangers so their operation has subtleties that combine issues associated with both. Unlike a normal heat exchanger, it is possible for the temperature in the liquor stream to rise or fall, depending on the evaporating pressure.

In Standalone (Manual) operation, the user must specify the final liquor pressure (or atmospheric pressure) or temperature.

In Flashtrain mode, the vapor outlet must be connected to a Flashtrain sink such as a Barometric Condenser, Shell-Tube condenser or another FFE4 condenser.

The model combines separate condenser and evaporator (flash tank) models that interact through heat transfer between them. An optional recirculation stream can take some fraction of the evaporator outlet and recycle to the inlet. Environmental heat losses can be specified for both the condenser section and the recirculation pipe. 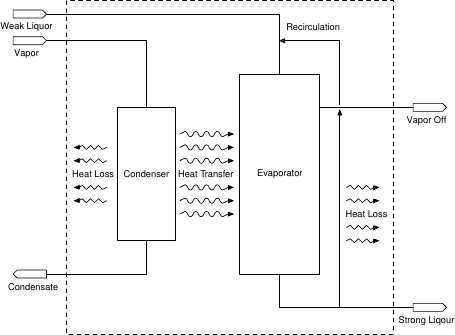 Unit Type: FFEvaporator4 - The first tab page in the access window will have this name.

The page contains the results fields.

Converting Existing Models to use FFE4

If a complex model is failing to converge the status of the TemperatureHigh and TemperatureCrossover tags should be checked.

Turning an Effect Off

User can set up a Multiple Effect circuit covering the maximum number of FFE units. The same circuit can be used to model less effects by switching certain FFE units offline.

When a FFE unit is switched off, it will NOT condense any steam on the Shell side NOR Evaporate any vapour on the Tube side, so there will be NO steam supply to downstream units. If the FFE unit is part of a flash train, it will break the flash train. To fix this problem, user has to add a TIE unit to split the steam out in the upstream unit (N-1) and direct it to the downstream unit (N+1) Shell in, as shown in the image below:

The Tie configuration needs to be setup with a mode switch, (usually in a PGM file), in the above example:

Please see the distributed example project for the PGM code for handling the configuration switch.

With complex evaporator cascade models which may include additional flash tanks and condensate reflash pots, there may be some difficulty having the model solve at all. A good physical understanding of the interaction between the elements in a model is necessary.

If this is run with incoming liquor at a low temperature, the model will show an error Demand Not Met on FFE05. Looking at the required and actual demand we find that the actual flow is much greater than the demand required: 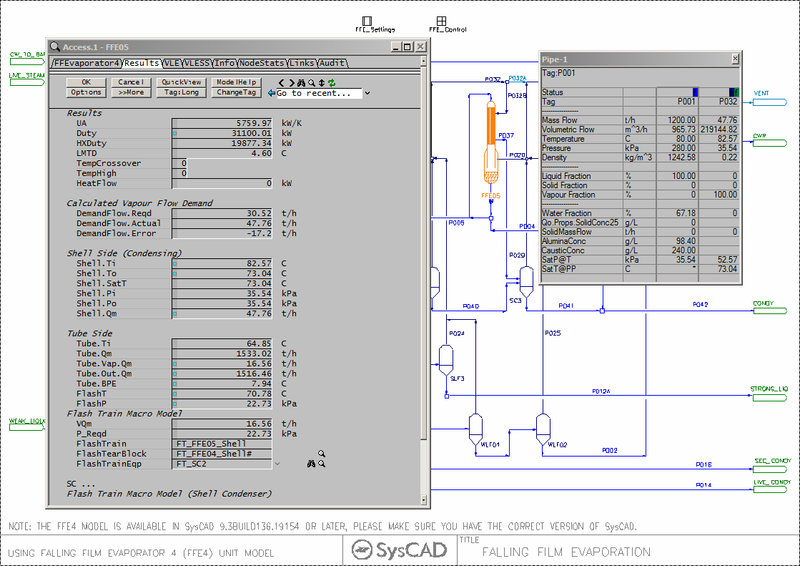 If you disable WLF01, then the model runs happily with no flow from WLF01. 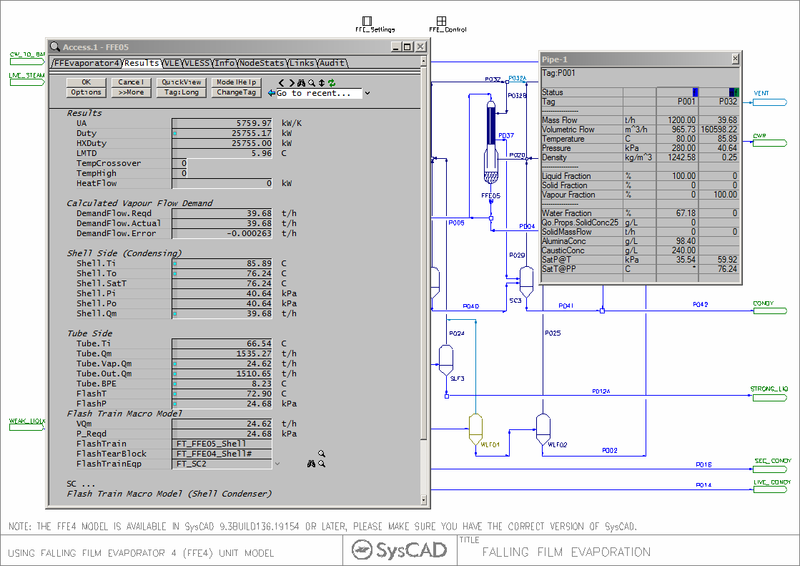 The problem arises because the saturation pressure of the incoming weak liquor in P001 is less than the pressure in P032. Physically this means that this configuration would have vapor flowing into WLF01, which would effectively be acting as a barometric condenser using the cold incoming weak liquor!

With WLF01 on, the flash pressure is set at the minimum flash pressure of all the sources feeding FFE05, here 35.54kPa absolute. Then the demand calculated from the other sources (SLF3, SC2 and FFE04) is large (since we have such a low flash pressure). Physically, the DeandFlow.Error of -17.2tph would be flowing back to WLF01, heating the liquor out. Since the SysCAD flash macro model doesn't allow this, we end up with the Demand Not Met error since we push all the 47.76tph flow to FFE05 which is only "asking" for 30.52 tph.

This example illustrates the sort of subtle errors that can occur in FFE cascades and other complex flash train models, and why a good physical understanding of the overall model and how the components interact is necessary to find these sorts of errors.

Sometimes the model will not converge, with the errors being flash pressures which are bouncing around. This often happens when the flows are low or the heat transfer or area high.

The problem is that the high demand in the flash macro models will lead to overshoot in the flash pressure estimates. The flash pressure changes are adaptively damped in the solver, but the damping may reduce too quickly (controlled by the tag $Solver.Tears.Global.Damp.Decay (%)); experiment with reducing this decay from its default of 5% to 1%: 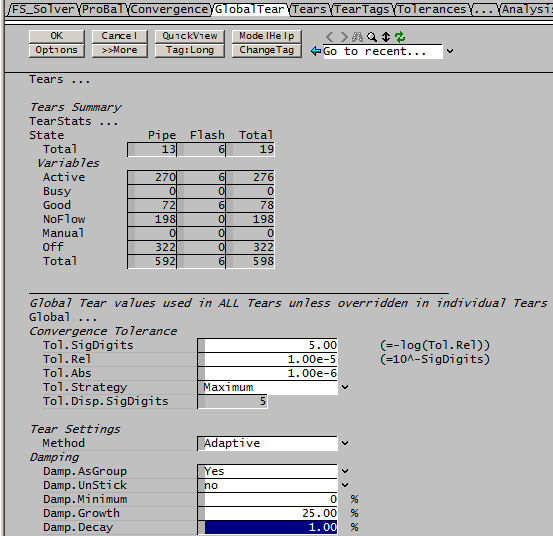 This may however slow down convergence in other models, so it is better to change the values for the Flash Train tear settings individually on the Tears tab: