The Free Energy Minimisation (FEM) model will apply standard FEM equations to the material in the feed stream to the FEM calculation block and produce a product stream with the lowest free energy possible.

The user may also specify an Environmental Heat Loss from the FEM unit. This may be calculated at either the FEM Feed or Product temperature. 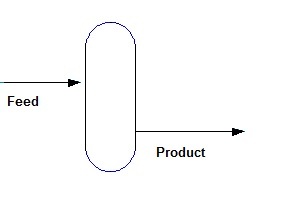 The diagram shows a drawing of the FEM unit, with a Feed and Product stream. When the user inserts the FEM unit into a flowsheet, a different graphics symbol can be selected from a pull down menu. The streams may be connected to any area of the drawing without affecting the actual connection point as SysCAD ignores the physical position of the connection.

The Free Energy Change for a reaction or a system is:

where dG - Change in Free energy

Equilibrium is achieved when the Free Energy is at the minimum value.

The solve routine is based on the stoichiometric "Villars-Cruise-Smith' algorithm for the Free Energy Minimisation reactions. A stoichiometric algorithm chooses a set of basis reactions to remove the element abundance constraint and determines the extents of each such that the change in free energy with extent is zero.

The actual species in the feed to the FEM are ignored - the model effectively adds the element abundances of each incoming species, and divides this between the participating species so as to minimise the free energy - or such that the change in free energy with changes in species concentration is zero.

The user must be VERY careful to select the appropriate species as Bypass (B), Inert (I) or possible product species (Y).

In the example shown below:

The Filter button is very useful as it allows the user to filter the species list to show only the species of interest. Please see Species Filter for more information on the Filter Options that are available for the species filter.

By default, all solid species are separate "single species" phases. Gases and Liquids are assigned to Gas and Liquid Phases initially. There can only be a single "Gas" phase - all gases and vapours are assigned to this phase, and this cannot be changed. There can however be multiple liquid phases - for example some liquids may be an 'aqueous' phase, while others may be an 'oil' phase. All non-gas phases are treated identically, so the assignment of the phase here is arbitrary.

For pyrometallurgy applications, there may be additional "slag" phases. In the FEM tab, the user may select from an additional dropdown list and change the phase of a group of species. Within each phase the concentration dependence of chemical potential is calculated using only species within that phase; thus a slag phase should have two or more species present. If a particular phase is associated with only one species, that species will be removed from the phase and added to the "single species" phases. The user is responsible for selecting the species composition of each separate phase (apart from gases, which are all part of the gas phase, and treated slightly differently in having free energy dependent on partial pressure; other phases have no pressure dependence)

When using molten liquid phases in FEM, do not use the global Auto Phase Change option. For example, silver has a melting point of 960C, but can exist as a liquid in a molten phase at much lower temperatures when a lower melting point metal (such as lead) is also present.

These may be set by the user to tune the overall reaction extents, and based on calculations in a PGM or a SysCAD Custom Calculation

Unit Type: Reactor - The first tab page in the access window will have this name. 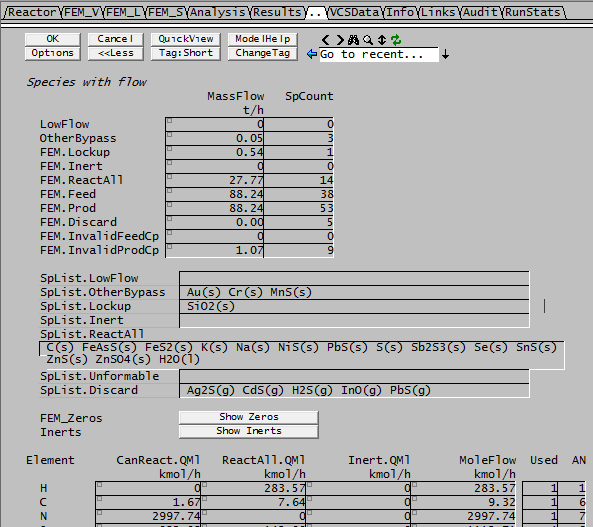 This shows additional information relating to the VCS (Villars-Cruise-Smith) FEM calculation. The algorithm determines a species basis and a set of reactions such that any of the (nonbasis) species can be produced from the basis specis. 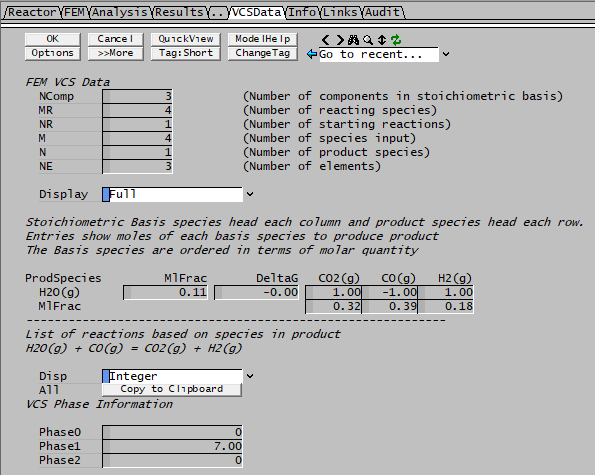 Suppose we have the ten species

Conceptually, we "convert" our entire feed to the four basis species via these reactions, then determine the extent of each reaction which minimizes the free energy. The only additional constraint is that each reaction extent lies between 0 and 100%. If the extent of a reaction is zero, then that species will not be present in the final product.

In fact there are many possible choices for the basis species, and the algorithm choses an appropriate set (and can change the basis on the fly during calculation). As discussed below, the feed composition may be such that it is impossible to partitiion the feed elements into the desired product species, in which case no solution will be found. The user must select an appropriate set of species (and phases).

The most important consideration in getting useful results from the FEM model is correct choice of the species and phases as well as ensuring that reliable thermophysical data is available for these. We recommend using the HSC database or a similar source for thermophysical data.

If the FEM model is used in an overall plant model, the user has no direct control over which species are present in the feed, and consequently the model may not be able to find a solution. As a simple example, consider combustion of coal in air, producing Carbon Monoxide and Dioxide. Since we expect to burn all the coal, we just choose the gases as FEM species: 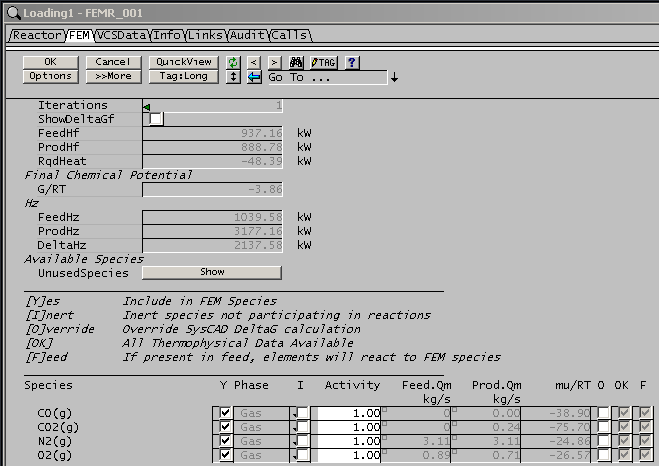 Now if we have excess air, there are no problems:

Increasing the feed carbon, we can use all the oxygen and produce CO2

Additional carbon, and we need to produce CO as well

However if we put in excess carbon, there is no possible reaction that can use all that is present in the feed: the FEM model will detect this and complain

In this case we can easily correct the model by adding carbon as a FEM species. However in a model with dozens of species, it is not always clear which species may be present in the product, and one should avoid having species present which will not be products. (For example, if we are modelling combustion of liquid butane at elevated temperatures, we will not expect this to be present as a product.)

In solving a large plant model with many recycle loops, it may take a number of iterations before the feed composition to a particular model is determined, and there may well be no solution to the FEM model in the meantime. If there is no solution, the model "gives up" and sets the feed product composition to the feed and this may disrupt the overall model from finding a satisfactory solution. In this case it may be useful to use a simplified set of reaction in a reaction block to find an approximate plant solution before enabling FEM.

A further problem arises if we specify exactly 100kMol/h flow of carbon. Although there is a feasible solution (complete combustion to CO), a numerical issue arises in the calculation. (For a valid solution, there will be trace quantities of each of the species present, and we cannot satisfy this condition in this situation without a small mass imbalance.

Further issues arise when multiple species are in a particular phase. As a rule, it is necessary that all species are actually present in a phase if there are reactions available that will produce that species. This is because the chemical potential becomes large and negative as the quantity of a species goes to zero, so adding a trace amount of that species (if none were present) would reduce the free energy. However the amounts required may be miniscule and may cause roundoff errors in calcualations, so the model removes trace multiphase species altogether to avoid this issue. Removing a species may then leave the system without any possible reactions - this is not an error, just an indication that the final state is fully determined.

This is generated in the case described above. There is no possible reaction producing the FEM species that can use all of a particular element in the feed. Add additional species containing that element so that it can be utilized.

Suppose we have butane combustion

If we specify FEM species CO2, O2 and H2O, and feed composition, then there is no freedom to specify the product composition, this is completely determined since all the C in the butane must react to form CO2, and all the H in butane reacts to form H2O. If there is a feasible solution to the reaction involving the FEM species, the model will find it, but issues this warning.

We could add a further species CO (Carbon Monoxide) and the products would not then be determined by stoichiometry alone, removing the warning.

In the butane example above if we have C4H10, CO2, O2 and H2O as gaseous species, we have a reaction. However if there is no C4H10 in the product, it will be removed from the gaseous phase, and there is no further reaction available among the remaining species. So these species will work as FEM species if we have a rich mixture (excess C4H10), but if we have a lean mixture we will get the warning.

This message can arise when the solution is indeterminate.

One particular situation where the message appears is when you have two different phases of the same species, which would normally appear in different (non overlapping) temperature ranges. In most cases, the free energy contribution of the two phases will be sufficiently different for the model to choose between one or the other (for example, H2O(l) vs H2O(g) above and below 100C at atmospheric pressure)

However depending on how the model handles the calculation of entropy and enthalpy for the "out of range" species, the two values may be nearly identical, resulting in an under-constrained system. The model can't decide which form should be present and ends up jumping back and forth between them (hence the Maximum Iterations Exceeded error message)

To fix this error, check on the temperature range for which the phases are valid, and remove the species that is out of range.

If the temperature is indeterminate (Fixed Heat) or controlled externally, further logic in a PGM might be needed to deselect a particular phase depending on the actual reaction temperature.

A general message is issued if a FEM model has multiple allotropes of a solid species, eg Cuprospinel which can exist as CuO.Fe2O3(s) or CuO.Fe2O3(Bs). This situation can arise when importing species from the HSC database. Allotropic forms of a solid will be imported as separate species, in this csae as a solid (s) phase and a beta solid (Bs) phase. These will have non-overlapping ranges of validity for the specific heat.