These fields will only be writable for Vapour species, i.e. the user has chosen Gas for Phase Occurrence.

This field is optional.

If a component is to be used in Vapour Liquid Equilibrium (VLE) flash calculations, the Vapour Pressure must be provided for the vapour phase of the component. The Critical Temperature (Tc) must also be defined. The other critical constants and the acentricity value are also normally defined but may not be required, depending on the form of the equation chosen.

The user does NOT provide this information for steam, as SysCAD will use in-built equations to calculate the vapour pressure of water. Please see Water and Steam Properties.

Where the VLE flash calculations will be used, the user should also check that both the liquid and vapour phase of the component are defined and selected for the project.

The user may optionally specify a range of temperatures for the vapour pressure equation. Either or both of the limits may be specified.

The Antoine equation is generally intended for low pressures, up to approximately 2-3 bar (absolute). It is based on experimental data obtained at these relatively low pressures and is useful (and very accurate) in this range. It should not be used above the range indicated as it does not extrapolate well.

The Antoine equation has a lower limit as well, but for temperatures below this limit the material is typically solid; there is no downside to using the equation below the minimum value.

The Lee-Kesler equation is very accurate for high pressures, and is exact for the critical temperature, since the terms in the equation sum to unity at that temperature. It is also exact for [math]\displaystyle{ T_r = 0.7 T_c\, }[/math] by the definition of the acentric factor:

It is less accurate for lower temperatures, especially for polar molecules. For example, for water it predicts a vapour pressure of 90kPa at 100°C compared to the true value of 1atm (101.3 kPa).

Note: If Pc and Ac are not available then the Range End value will be ignored and the Antoine equation will continue to be used up to the critical temperature (Tc).

See Transition from Antoine to Lee-Kesler for more information on how SysCAD handles the transition.

See Transition from Antoine to Lee-Kesler

Transition from Antoine to Lee-Kesler

One concern with moving from the Antoine to Lee-Kesler equation is the transition between the two ranges. Discontinuities can lead to problems with the SysCAD solver, so SysCAD uses interpolation in the range just above the Antoine maximum limit (Range End).

To find the overlap range, consider the possibilities: the discontinuity may be positive or negative, and the slopes may not match. 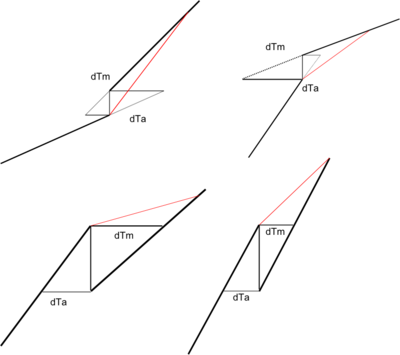 Within this range SysCAD linearly interpolates between the two equations, so that if [math]\displaystyle{ \alpha = (T-T_{max})/(T_o-T_{max})\, }[/math] then

The multiple terms for gas data: Critical Constants, accentricity and boiling point (dew point) are defined by a single function