The time stamp for data in the historian will be the SysCAD simulation date and time. The SysCAD Time does not equal the real present time. The zero reference point for SysCAD Simulation time is 0:00:00.0 hours on 1/1/1970 and this is the initial value for a new project. For a dynamic project the time stamp associated with data (trends) is meaningful, however for a steady state project time is incremented by one second for every iteration (the historian time stamp values are meaningless). In steady state projects historian trends of data for tags represent changes in values as the project converges for a single solve and changes in values between different scenario runs. 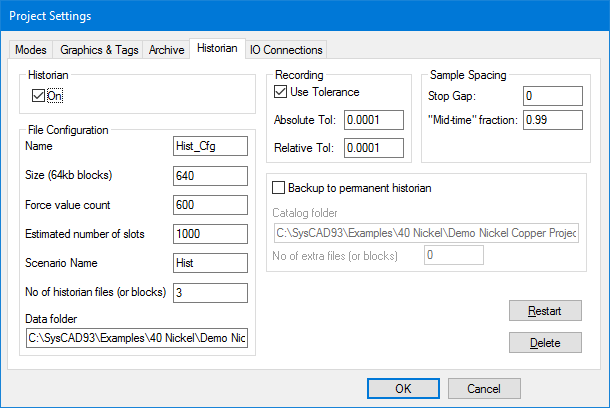 Two commonly used buttons on the Historian tab page of Project Settings are Restart and Delete:

The historian can be set to restart automatically every time a project is started after a full stop. This option is on the Start Options tab of the Project Solver Settings window - see Solver Set up for Dynamic Projects.

The historian data can be accessed in four ways:

Filtering is rarely required as the Archive Reporter is now used for reporting. Before the Archiver, it was useful in a Real Time SysCAD project. Each iteration the current tag value is placed through the historian filter for that tag. As a tag value has to be filtered EVERY iteration, only use this when required. Two filters are currently available; they may be applied singularly or together (cascaded).

This filter is applied first. Its result is a type of moving average. The user may set the length of the window, the number of points, where each point is an iteration. Every iteration SysCAD discards the oldest point and adds the current value (or new value if one arrives) to the end. SysCAD then calculates the average value. The maximum length or count for a window filter is 100.

Each iteration, if [math]\displaystyle{ \alpha \lt 1 }[/math], the current value (X) may be altered using the previous value (Y) as follows:

This algorithm is the same as the Boxcar algorithm but an attempt at automatically adjusting Delta to a realistic value is made. The parameters are DeltaLo, DeltaHi, NoRec, NoNotRec and Change.

For example values of 3 for NoRec and 20 for NoNotRec may be used. Like the Boxcar, a time-weighted average is used.

Recording parameters may be altered in the Trend Window.

These will indicate how often a tag value is recorded and can be used to fine tune filters and data compression algorithms. Values that are recorded frequently or very seldom indicate that the boxcar delta parameters need to be changed.

This is available in the Options - General - Project tab page.

You can enter a filename to which statistics will be sent when the Fetch button is pressed. The file may be viewed in a spreadsheet. The column titles indicate what each column and statistic represents. The statistics are generated over the time specified in the No. of iterations box. Pressing the Reset button can reset this.

Occasionally SysCAD variable tags would change upon new version release. These tags would normally be changed during project upgrade. If one of these old tags were used by the historian, you may get a warning message in the message window such as

These tags can often be found on the Trend page if they are being used.