The falling film evaporator 3 (FFE3) is used for to evaporate water from liquor. A schematic of the unit operation and its inlets and outlet are shown in the diagram below Diagram.

The unit operation is called a falling film evaporator, but the model is also perfectly applicable to a rising film evaporator - the descriptive equations are the same. The basic layout is a vertical tube bundle in a shell with the liquor to be evaporated on the tube side and heating steam to the shell side. In normal operation there is sufficient heat transfer to heat the tube side liquor to its boiling point and evaporate some water. This greatly enhances heat transfer in the tubes. The mass flow of evaporated steam will be about the same as the heating steam, but it will be at a lower temperature and pressure. Generally it is still useful for other heating applications in the process and exported to a subsequent evaporation stage as heating steam or elsewhere in the process plant. There are many different physical arrangements for feed, volumes, recirculation, etc. The flow of liquor in the tubes may be either downwards or upwards depending on the arrangement.

In a falling film evaporator, weak liquor is pumped to the top of the unit and distributed to the tubes where it runs down as a film. There is often some recirculation of evaporated liquid back to the inlet.

In a rising film evaporator, weak liquor rises up through the tubes - it is driven by the the formation of steam bubbles in the tubes. Some of the liquor is often recycled back to the bottom of the tubes.

The concentrated liquor and vapour streams will leave the system at the specified operating pressure. This is usually the saturation temperature of the product liquor, although if there is not sufficient heat transfer then there will be no evaporation and the liquor will exit at the temperature determined by the heat transfer.

The model includes a number of different options for environmental heat loss which is assumed to come from the shell side. Shell side condensate leaves the system at the saturation temperature based on the shell side operating pressure. 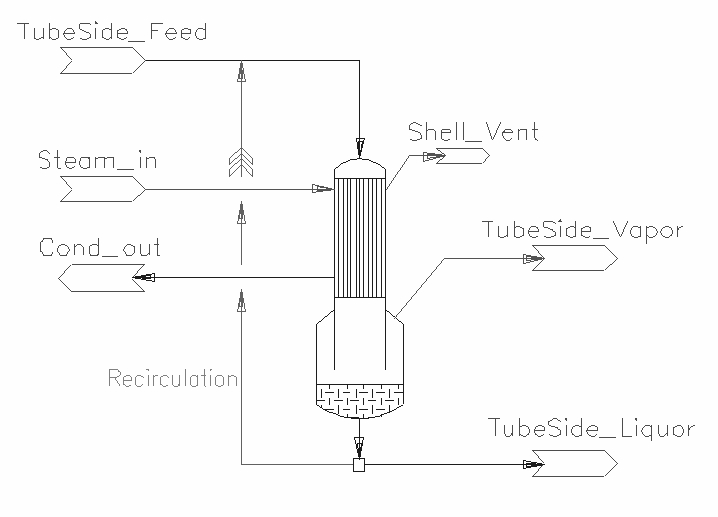 The diagram shows a drawing of the Falling Film Evaporator, with the connecting streams. The Falling Film Evaporator requires Steam In and Liquor Feed connection in and Condensate, product liquor and evaporated vapour connections out. There is also an optional vent connection from the shell side for non-condensable removal. The table below shows the minimum and maximum numbers of connections. There can be multiple sources of tube side feed and steam in.

The unit will basically be 'bypassed' without the user having to change any connections.

There are several different operating modes for the FFE3. The mass flow of steam to the unit may be;

The tube side operating pressure is an input variable (this value may be set either manually or by a PID controller).

The steam mass flow to the FFE3 may be higher than the amount that condenses if there is a vent flow specified - the vent flow will include the specified amount of steam plus all non-condensable gases in the steam flow in. The vent flow, concentrated liquor flow and evaporated steam flow are all assumed to be at the same pressure and temperature.

Falling film evaporators are a combination of flash tanks and heat exchangers. Their operation has subtleties that combine issues associated with both. In addition they are often connected in series with other evaporators or other flash tanks and the behavior of the whole system may be yet again more complex.

Some of the behavior may be counter-intuitive. For example;

There are three different connection modes for steam supply to the FFE3. The mode is selectable in the access window for the FFE3 and allows the FFE3 unit operation to be configured for different applications or situations.

The shell side operating pressure cannot be higher than the steam supply pressure, but pressure drop can be controlled. The FFE3 has three options for shell side pressure control.

The Tube Side Operating Pressure is an input variable that can be set by the user or a PID or PGM controller. In practice, the tube side operating pressure is generally controlled by the down stream steam demand - often another evaporation effect, condensing heat exchanger, barometric condenser or export to a steam line at a regulated pressure. At present the FFE3 tube side operating pressure cannot be automatically controlled by using the macro model and an external control must be used to adjust the pressure. This feature will be added in a future version. Until this is implemented tube side pressure can be adjusted to match the demand using a PID controller. This method is detailed in a later section.

The flow chart below shows the layout of the FFE3. Supply steam enters the shell side with an optional pressure drop. Any non-condensables in the steam plus a user specified vent flow of steam plus any excess steam which cannot be condensed leave through the vent. The theoretical amount of steam that can condense is that required for the maximum calculated heat transfer plus the environmental heat loss. Environmental heat loss is assumed to come from the shell side. The steam condenses at the saturation temperature corresponding to the shell side operating pressure. The condensate and vent streams leave at the same temperature and pressure (NB if the steam supply is superheated, the superheat energy will have been given up for heating and is included in the energy balance). The tube side liquor feed streams are assumed to mix perfectly along with any recirculation flow. The mixed stream enters the tubes and absorbs heat from the shell side. If the liquor is colder than the saturation temperature for the tube side operating pressure, it is heated and once it reaches saturation evaporates water as per the energy balance. The concentrated product liquor leaving the tubes may have some fraction of it recirculated back to the liquor feed. In the FFE3 model there is a built in recirculation option and an external splitter and lines are not required although may be used if desired. The tube side vapor may have some superheat due to boiling point elevation depending on the concentration of solutes in the liquor stream. If this is the case there is an option to remove superheat through environmental heat loss from the tube side so that the exit stream is saturated vapor. 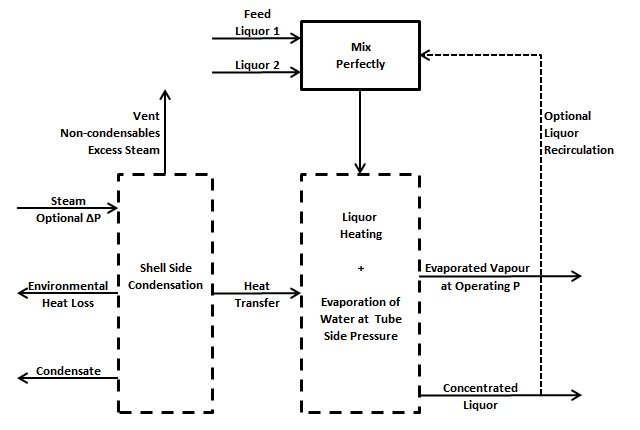 When the FFE3 is connected to another unit operation which uses steam, the tube side operating pressure must be adjusted so that the exported steam at the specified pressure (which also determines the temperature and mass flow) matches the demand. SysCAD creates macro models for a flash tank and condensing heater but that functionality is not yet implemented for the FFE3 so the user must add an external control to adjust tube side pressure.

The simplest way to do this is to use a PID controller which uses the theoretical duty of the steam demand (shell and tube heater or another FFE3) as the set point and the actual condensate duty as the measured value. The output or controlled variable is the tube side operating pressure. In the example below there are two FFE3's connected together in series. The first uses live steam to the shell side for heating. The second uses evaporated steam from the tube side of the first one for shell side steam. The concentrated liquor from the first one is the feed for the second one. A multiple effect evaporator train with more effects would have subsequent effects connected in the same way as the second one here except the last effect would be connected to a barometric condenser. 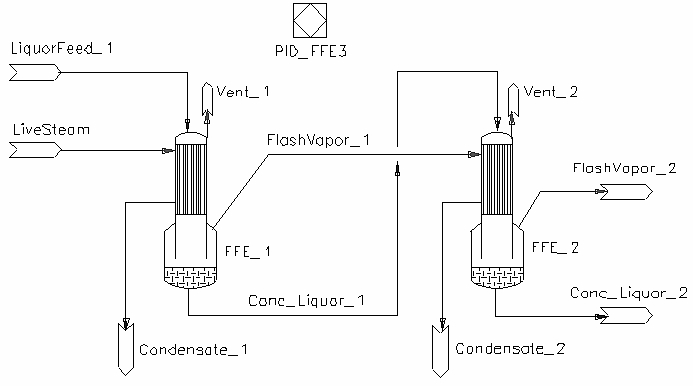 The image of the controller below shows how the actual and theoretical duties of FFE3 number two are used to control the operating of FFE3 number one. Note that the controller is ReverseActing - as the operating pressure (output variable) is increased, the actual condensate duty (measured variable) decreases. This is because, even though the exported steam from the number one evaporator is hotter when operating pressure increases, there is less of it and thus less heat transfer. Conversely when the pressure decreases, there is more steam produced, but saturation temperature goes down and the temperature difference to drive heat transfer decreases so the theoretical steam demand decreases. 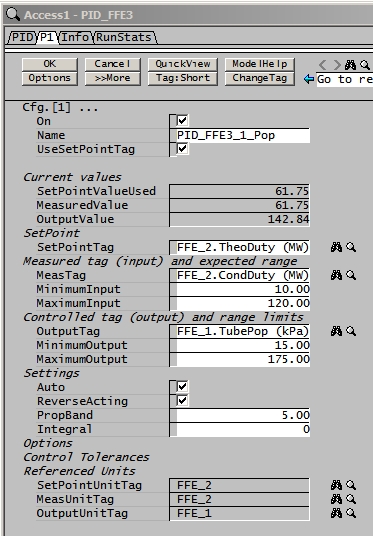 NB When setting up these controls in a model it is important to make sure that the input and output ranges make sense and properly span the expected values.

Unit Type: FFEvap3 - The first tab page in the access window will have this name.

Set up a PID controller to adjust the appropriate parameter such that the Duty Balance is zero.