User can select from the following 3 Cooler options:

Arbitrary reactions may be included. For example to model oxalate coprecipitation: 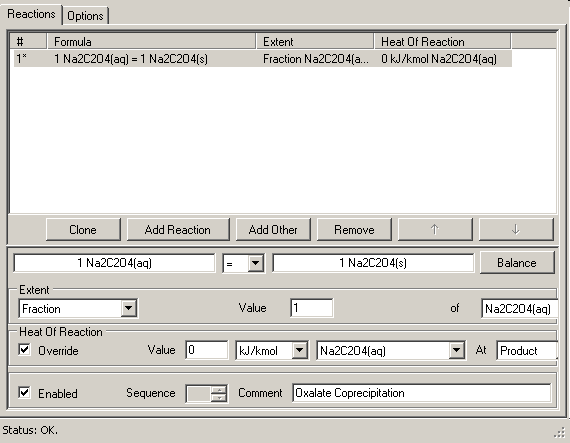 Because the model handles the key species (H2O, NaAl[OH]4, Al[OH]3) specially, it is recommended you not include reactions with these species unless the quantities involved are minor since doing so may upset the overall water balance in the model and the results can be unpredictable.

The Precipitator model can do simultaneous classification and precipitation. A second output stream (underflow) can be attached, and the split of solids to overflow (Product) and Underflow controlled by an embedded Solid-Liquid Separator model. This includes the ability for solids/liquids separation by full PSD, as well as optional separate separation of specific solids species such as Sodium Oxalate - Na2C2O4(s). This internal classification option is only available in the ProBal solver and only for PSD methods (precip and separation).

Typical use of the classification capability would be to 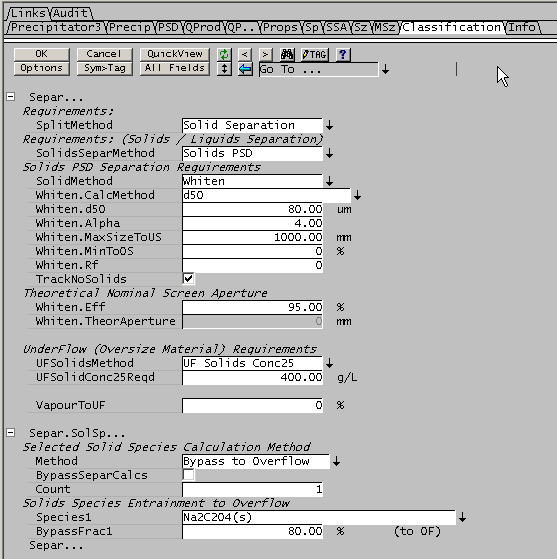 In the results section of the Classif Tab there are extra fields displayed: UF.SolidsTakeoffQm, UF.SolidsTakeoffFrac and UF.FinalSf. The SolidsTakeOff values represent the internal Solids recycle numbers, which are equivalent of P_007 in the full configuration (left image).

The Separation Results: UFSolidsRecovery and UFLiquidRecovery variable refers to the internal classifier prior to recycle. This is equivalent to "Classifier" in the full configuration (left image)

When classification is used, we display an effective solids residence time, since the solids in the underflow remain in the tank much longer than the liquor. This is shown on the first tab page (Precipitator3):

The model solves iteratively to converge a number of key parameters

The overall convergence parameter is the Convergence.Limit, and the model is converged when the relative change in all the key parameters is less than this limit. In the simple case of a non-psd model only the yield error is used; if full PSD is on, then the numbers contribute as well. The Solution Convergence section in the access window shows these errors individually and in total.

In a full plant model or even a large whiteside model with recycle streams, there is little point in requiring strict convergence of individual precipitation tanks at each SysCAD iteration, since at the next iteration inlet conditions will have changed, especially early in the overall solution. The plant model will take several hundred or even thousands of overall iterations to converge, and this will allow the internal models to converge. In this it is possible to disable the PSD Number errors and Classification convergence errors, and the overall model will still converge.

If you have a single precipitation/classification tank which is not part of a larger model, this may not converge when SysCAD is run because the internal classification recycle may not have converged fully; the easiest way to force convergence is to increase the number Rqd Converged Iters in the Probal Solver Setup dialog:

If a classifying precipitator is part of a circuit, this issue doesn't arise, because the internal state converges rapidly.

If a precipitator is poorly mixed, then some of the input stream may never enter the tank and simply bypass directly to the outlet. This typically occurs when row tanks are connected by launder weirs which are simply open overflow channels running from one tank to the next. The model allows for bypassing by specifying a fraction of the incoming flow to pass directly to the outlet.

If Thermal Override is selected, then other thermal calculations have no effect. Cooler calculations are still performed, so that the performance of the coolers is still available, but they do not affect the actual final temperature.

Options for Thermal Override is:

NOTE: If thermal override is being used, ThermalLossMethod (see next heading) is NOT available.

An additional thermal loss (or gain) may be specified by this selection, which is only available if Thermal Override is disabled. It is applied in addition to any cooler or reaction heats.

Losses of water due to evaporation can be important and these also lead to significant overall thermal losses because of the latent heat of evaporation. Evaporation may be specified as:

Using the constant mass rate, it is possible to implement a function in PGM to calculate evaporation.

From Build 139 a Vent connection is required else evaporated vapour is sent to the Product stream (with a warning).