A Precipitation stage is modelled as a continuous well-mixed tank reactor. The residence time in a precipitation tank is typically in the order of two hours and the time for feed streams going into the tank to mix with the tank contents is on the order of minutes. Thus all the material in the tank can be assumed to be at the same condition as the tank overflow and those properties used for precipitation calculations.

The supersaturation driving force is taken as the difference between the actual A/C ratio minus the equilibrium A/C ratio at the outlet conditions to the nth power, usually 2. The surface area per unit volume of liquor is the specific surface area of the gibbsite solids in the slurry (SSA) times the solids concentration divided by the liquor volume to give the surface area per unit volume of liquor. The residence time is the tank volume divided by the outlet slurry volumetric flow rate. The temperature dependence is an Arrhenius type term. The temperature term, rate constant and any liquor impurity effects are incorporated into a Growth Rate Factor, kG.

Assuming particle growth is the only mechanism for alumina precipitation (i.e. no homogeneous nucleation), the rate equation has the following form:

These methods assume that material is deposited onto existing solid surface at a calculated rate, growth rates of the order of 1[math]\displaystyle{ \mu/ }[/math]hr are typical. Knowing the actual surface area, we can then predict the rate of mass increase via 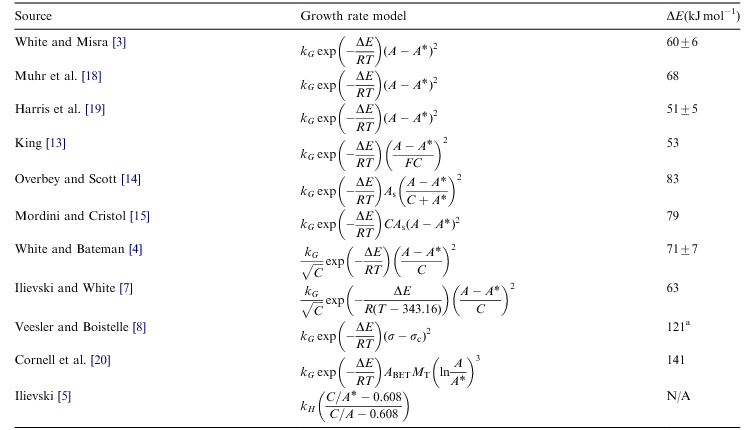 This is a variant of the White method where the growth rate is calculated as below (Ref 4). The equation has been modified for inclusion in SysCAD by the addition of a tuning factor, gF, and by the adjustment of the growth rate constant. In the original equation caustic concentration is expressed as equivalent Na2O and in the SysCAD implementation as equivalent Na2CO3 (thus the original constant 7.4×1012 becomes 2.83×1013). However, the original equation was derived using washed hydrate and pure liquors in small scale (1 litre) batch tests which have much higher precipitation rates than actual plant conditions. The default constant for this equation in SysCAD has been adjusted downwards by a factor of ~12 to give results that are in line with typical plant conditions so that starting with default values will give reasonable estimates of plant performance. 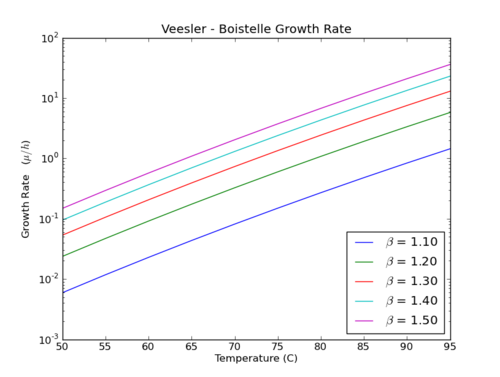 The growth rate determined by Equation 3 is then used to determine the amount of hydrate precipitated.

Plant operating experience and laboratory testing indicate that these are the primary factors influencing precipitation rate. The additional kG term allows us to also model effects of other liquor conditions. 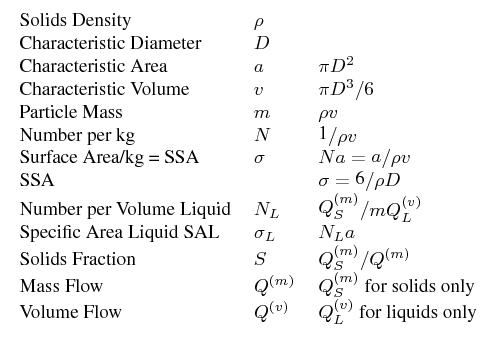 Ohkawa, Tsuneizumi and Hirao (Ref 5) correlation defines the mass of soda precipitated with the Alumina as:

Armstrong, Hunter, McCormick and Warren (Ref 7) correlation defines the rate of incorporated soda with the Alumina precipitation as:

Let us model a very simple precipitation process, with just a single component, and we specify the concentration of that component by [math]\displaystyle{ X }[/math]. Assume the rate of concentration change is just given by 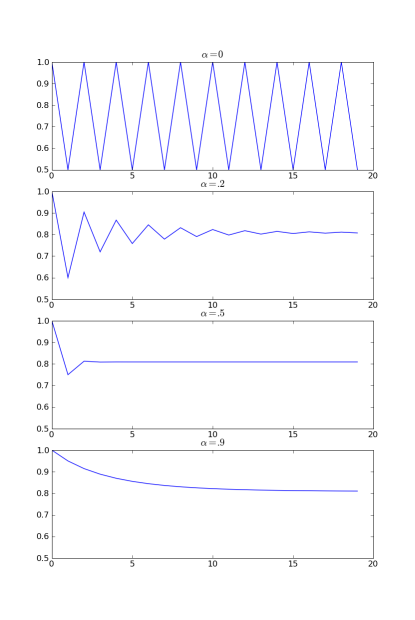