Mapping between SysCAD streams and TCE streams is done as shown in the diagram below. The dotted areas represent the control volumes applicable to each type of thermodynamic calculation. The Unit Operation, or the black control volume, incorporates forward mapping, calculation, and reverse mapping. Unit operations would include reactors, evaporators, reverse osmosis units, solvent extraction units, and more. The Side Calculation, or the red control volume, is used to read one or more streams and perform a specific calculation. It can be used as a virtual sensor in the model, and is often used to determine reaction extents for SysCAD reaction blocks. The Direct Calculation, or green control volume, does not use mapping at all. As mentioned previously, it is a direct interface to the thermodynamic software. The Direct Calculation is a user interface for performing single point calculations and generating trends, similar to how one would typically use thermodynamic software directly. 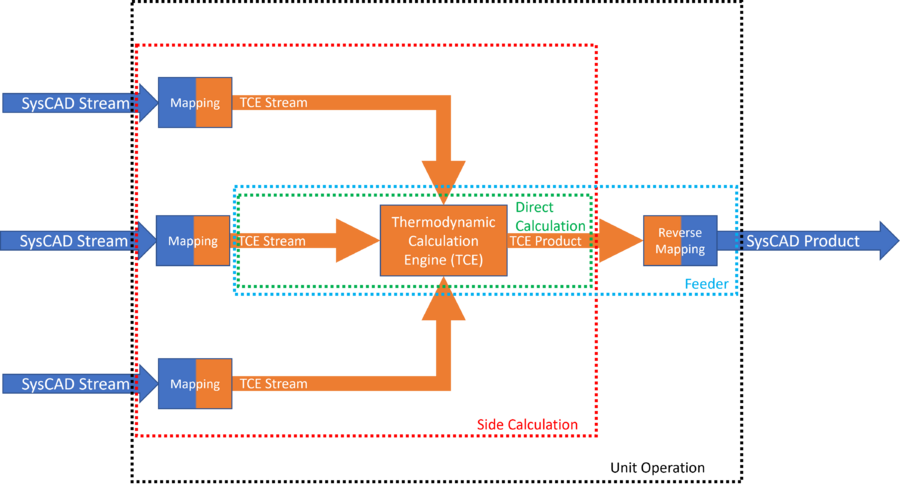 A typical set of breakdown reactions is given below:

Species that are mapped by ions undergo a reaction like this to form an ion that is recognized by the TCE. 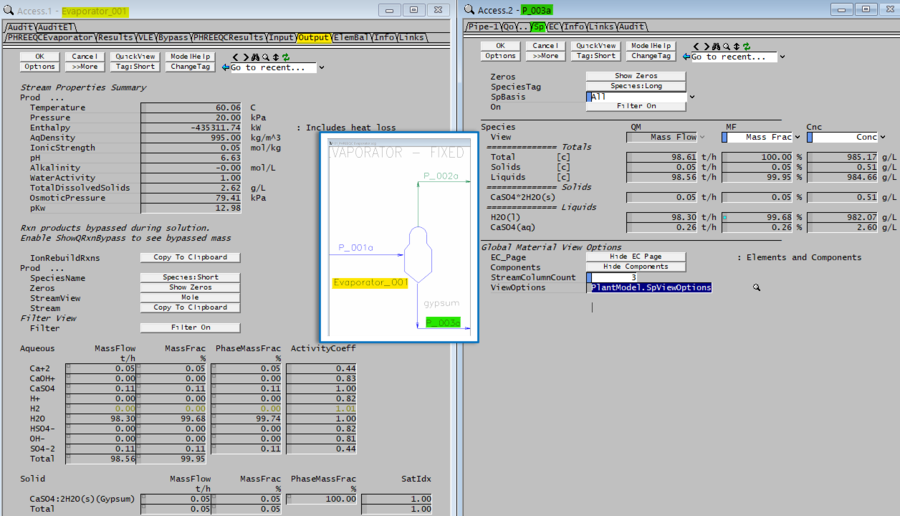 A typical set of reactions involved in the formation of species is given below:

When a SysCAD stream contains a species for which there is no equivalent species in the TCE, it bypasses the TCE solver and is add to an Unmapped stream. The user gets a warning in this case. When a user specifically specifies a bypass, this is added to the Bypass stream. The user does not get a warning in this case, as it is based on a user specification. Both of these streams are added to the final TCE stream.

A third type of stream is the reaction bypass stream. This is used primarily when a TCE (that does not have its own VLE capabilities) is used in conjunction with the SysCAD VLE model. In this case, both a TCE solution and a vapour stream in equilibrium with the TCE solution is produced.

The solution here is to select or generate a different database for use with the TCE which includes the species you are trying to map. Alternately, the user may purposely bypass the species (or ensure they are not in the feed). Note that in the case where SysCAD VLE is used together with a TCE, species may be generated which are not represented within the TCE. These form a reaction bypass stream which is considered part of the TCE solution. This can be used where a TCE is defined for the aqueous phase only.

When a TCE solver predicts the formation of a species for which there is no equivalent species in SysCAD, this results in the unmapped species being reported as an error. The model is switched to a side calculation.

The ideal solution here is to add species to the SysCAD database to enable mapping to a SysCAD stream. Alternate solutions include: suppress solids in ModelCfg so they do not form (eg trace amounts and/or slow kinetics); check inputs and settings to review if this is a valid case; bypass or use CFE on some species to change the conditions; or use the TCE calculation as a side calculation.

When a TCE solver predicts the formation of ions for which there is no species that can be formed from them in SysCAD, this results in the unmapped ions being reported as an error and the model switched to a side calculation.

The ideal solution here is to add liquid/aqueous phase species to the SysCAD database to enable formation of the SysCAD species from the ions (ions are aqueous). Alternate solutions include: check inputs and settings to review if this is a valid case; bypass or use CFE on some species to change the conditions; or use the TCE calculation as a side calculation.

For example, if the ions Na+ and Cl- are reported as unmapped ions, the solution is to add NaCl(aq) to the SysCAD database.