In process simulation, air may be included as a chemical feedstock, a source of oxidizer for combustion, as a heat source or sink for environmental heat exchange, or to represent the air shed with respect to the dispersion of emissions. In some cases, air needs to be treated as a mixture of individual gases since its components may react in different ways with the process. In other cases, air may be considered as a non-reactive inert pseudo-species.

At ambient temperatures and pressures, all of the gases in ambient air are far above their boiling points with the exception of water vapor which is often close to saturation. The relative amounts of the gases in air are virtually constant except for water vapor which can vary significantly (and carbon dioxide which is slowly increasing over time). In general, the water vapor in air is treated separately from the rest of the gases. Water vapor may be a significant mole fraction of ambient air (typically 1-2%), but can be close to 10% in extreme conditions. Psychrometric calculations usually treat dry air as if it were a single pseudo-species and consider humid air to be a mixture of water vapor and dry air.

There are two ways that air can be included in SysCAD depending on the simulation requirements. One method is as a non-reactive pseudo-species, and the other is a detailed chemical description of air where the individual components are specified.

The non-reactive pseudo-species is useful for situations where there are no chemical reactions between air and the process. In most cases air can be considered an ideal gas. An air species is included with the standard SysCAD species database and has a full set of thermodynamic and transport properties taken from the NASA Glenn database that covers a wide temperature range (200–6000 K). This database is also a useful source for heat transfer and fluid flow properties data! This species is included in the default SysCAD database as Air(g).

The Air(g) species has a molecular weight calculated from the composition formula given in the NASA database[1]. Here, the composition for air has been updated to include the latest average concentration for CO2 from NOAA[2] (414.5 ppm as of April 2021). The mole fractions of other species from the original published data have been normalized to account for the increased CO2. The volume fractions and mole fractions are taken to be equal assuming ideal gas behaviour. The molecular weights for the individual species are taken from SysCAD.

A detailed dry air model with individual components is also included in SysCAD. There are several options that may be configured in the Plant Model - Environment tab to define environmental air. PlantModel DryAir is available as a selection in Feeders under Feeder Operation Selection. In this form, air is represented as individual components, each of which can then be independently created or consumed, e.g. via reaction.

Ignoring trace species (molar fraction less than [math]\displaystyle{ 0.1 \times 10^{-6} }[/math]), there are a dozen normally recognized species in air. The standard dry air composition is taken from NIST CIPM-2007[3], shown in the table below. 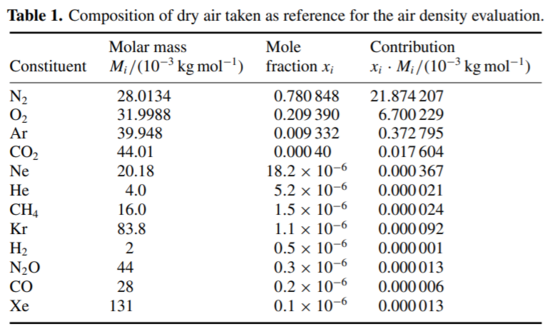 Note that values from this table could also be used to define the composition of a standard Feeder model.

As discussed on Wikipedia, there are various datasets with generally good agreement on the composition of dry air. In the new PlantModel DryAir options we have used the NIST CIPM-2007 dataset as shown above.

We are actively developing additional options within SysCAD to include simplified 2, 3 and 4 species models for dry air, available as additional options within the Environment tab. The simplest model for air would be a 2-species mixture of nitrogen and oxygen. 3-species air would also include argon, and 4-species air would contain carbon dioxide. If more detailed models are required, then it is straight forward to configure a makeup source with the extra species from the composition table. 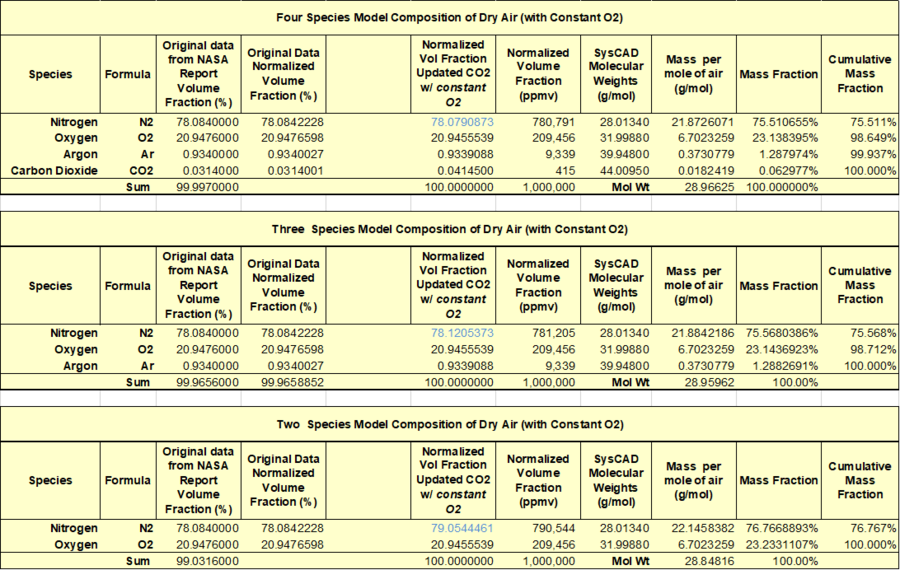 We are also looking at including more detailed psychrometric SysCAD models for humidity. These would be added such that we can define a Feeder or MakeUp source for humid air with the humidity calculations built-in. This would allow you to specify any combination of temperature, humidity, dew point, wet bulb, altitude, etc. and return the partial pressure of water vapor which can then be used to adjust the air feeder.

These update options are expected to be released in mid 2022.

For questions or feedback, please contact us at [email protected].