All of the Bayer Properties Species Models implemented in SysCAD are used to calculate the properties of liquors within an Alumina project.

The models use equations defined in the public domain. The model equations can be selected in the Global Method. For information on the equations used, please see Model Theory.

The public domain bayer property model included with SysCAD is:

All of the properties that are not explicitly calculated by the Bayer species model are calculated using the Standard species model, which uses the mass weighted mean of the liquor (see Standard Species Model).

When multiple streams are combined in a unit, and some streams use the Standard Species Model and others use a Bayer Species model, then SysCAD selects the higher level Bayer Properties model for the combined mixture.

In Build 137 we have implemented optional calculation of entropy based on the LM1985 specific heat. 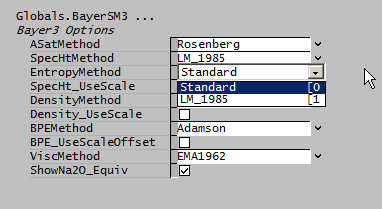 The Bayer Properties model does not include calculations for individual species Cp's and Heats of Formation, it only has Cp correlations for a Bayer liquor. A reaction (Reaction Block) works with individual species and therefore relies on Hf and Cp data entered in the species database to calculate a heat of reaction. However Hf and Cp data are not required if the user specifies a Heat of Reaction (HoR).

When a user specifies a reaction in a unit, the heat of reaction is calculated from the difference in the sum of the heats of formation of the products and reactants, as shown below:

The enthalpy of the product stream is calculated as follows:

The HOR is typically specified at 0°C. When SysCAD displays a HOR at a different temperature, it calculates this value using the Cp data for the species involved. Often the Cp data is not known, which is why we recommend that the HOR is specified at 0°C and why the values shown for HOR at other temperatures are inaccurate. If you enter the HOR at a temperature other than 0°C then you do need to enter the Cp data for the species involved in the reaction, as SysCAD will use the Cp's to correct for HOR at varying temperatures.

Using the above method gives energy balances around digestors that are within +/- 5% of measured energy input. Obviously having more accurate data for the full set of species would be preferable.

In this example the reaction is endothermic with an energy requirement of 252.3 kJ/kg of Al[OH]3(s). The user may also specify the heat of reaction on a molar basis

The volume flows or fractions on an individual basis as displayed in the access window give "confusing" values for Bayer liquids, see the volume fraction example below: 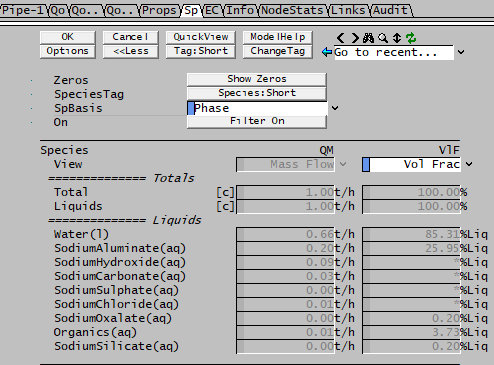 There is a simple explanation - the error is due to the fact that in a Bayer properties model, there is a defined density equation for a mixture but not for individual elements.

Therefore, to make sure the right numbers are used, only use the volumes calculated on the Bayer/Props page [eg P_xx.Qo.LVolFlow25 (m^3/h)] or preceding Qo pages [eg P_xx.Qo.LQv (m^3/h)].

The Bayer Properties are displayed on a separate Tab "Props", the example below shows some of the properties calculated. 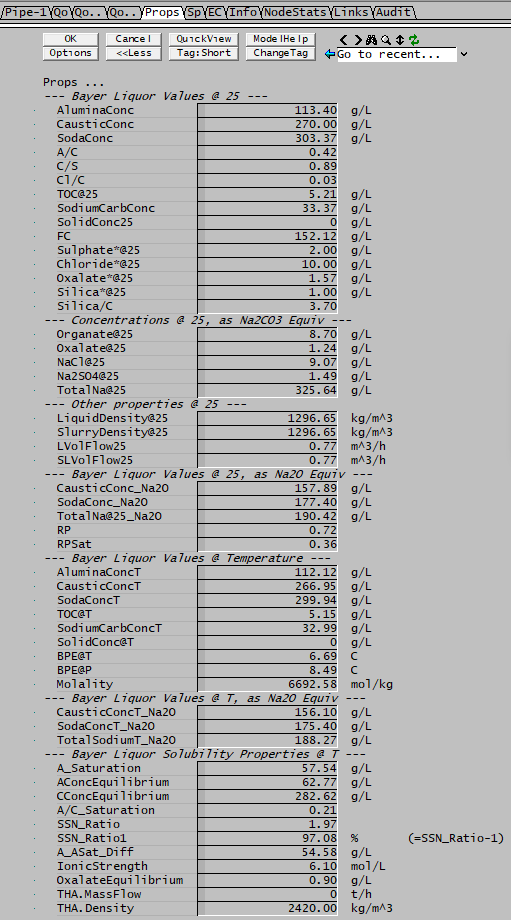