The Laliberte and Fabuss Korosi equations used in the species model are given in the Model Theory section below.

In order for the Potash Species Model to be available in a project, it must included in the configuration file of the project.

The Apparent density of each solute in solution is calculated from:

With the Lalilberte model the user has a choice of Enthalpy models:

Note: Both methods will calculate Cp using the equations show below.

The heat capacity of each solute in solution is calculated from:

With the Laliberte method, the liquid viscosity is calculated using the water viscosity, vw and the solutes viscosity using following equation:

The viscosity for each solute is defined by:

Using the Fabuss Korosi method, the Boiling Point Elevation (BPE) of a brine is calculated by first determining the vapour pressure lowering of a solution containing KCl and NaCl relative to pure water. The activity coefficient is determined by a semi-empirical correlation.4,5

The constants in the above equations, a1, a2, a3, b1, b2 and b3 are empirical values determined by experimentation.

The following species are used by the Potash set of models and are required in the species database and configuration file. Some of the species are optional, but if they are present in the database, their effects will be included in the correlation calculations.

If the Potash species model is selected, the user can choose to use Laliberte' or the Standard method to calculate Liquid Density, Specific Heat (Cp) or Viscosity.

The user may also choose either the Fabuss Korosi or the standard method to calculate the Boiling Point Elevation.

These selections are applied globally, so you cannot use different methods in different areas in the same project. The method is selected globally from the View - PlantModel access window Globals Tab as illustrated below.

When defining a Potash Liquor stream, it is possible to have SysCAD calculate the feed composition based on user defined potash species concentrations.

This is done in the Feeder unit - but only in a 'True' feeder, i.e. not connected to a sink on a different flowhseet:

This is shown in the images below:

The calculated feed composition will be set into the DSp tab. The variables set by the calculator are indicated by the yellow background. 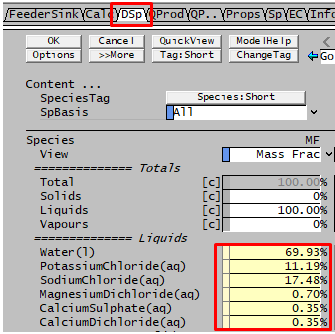 This data will be displayed on the 'Props' tab of pipes and Contents. Note: The term 'Salts' refers to all Chloride salts, i.e. KCl, NaCl, LiCl, MgCl2 and CaCl2.